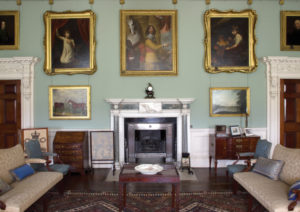 Tabley House is a treasure trove of paintings, many of them grand portraits of grand people, portraits which seem to become more natural and « homely » as we come to the modern age. However, two paintings which I loved to study while in the drawing room, conveniently situated in full view, each side of the beautiful fireplace are pictures of children, entitled « The Calling of Samuel » and « Children by the Fireside », painted by John Opie (1761 – 1807). I must confess to knowing nothing of John Opie, who became a successful portrait painter in London, in spite of his humble origins. In the late eighteenth century, artists generally came from artistic families or from educated middle-class ones. In contrast, Opie was born in St Agnes, near Truro in Cornwall, the son of a carpenter. It would appear that he showed precocious talent as a child and became known as the « Cornish Wonder », when brought to London by the poet and art critic Dr. John Wolcot, who launched him on his career. Though not so well known today, he was extremely popular in his day : his paintings were particularly admired for their originality and realism. It is this latter characteristic which attracts me to the two paintings at Tabley. Do look out for these children when you visit Tabley, but if you find yourself in Tate Britain, look out for some more Opie portraits, in particular the beautifully sensitive one of his mother.

The picture I like best…is the William Dobson portrait of John, Lord Byron, and his Page, which hangs over the fireplace in the Drawing Room. To me it seems imposing without being stiff, and the colours are so glowingly warm. Painted during the Civil War it shows Byron with the wound on his cheek he got during a night attack.  For some time he was the Governor of Chester, and since he was also related to the Leicester family by marriage one of their children was christened Byron in his honour (a girl, oddly enough).

I think Dobson shows him looking like a true commander; relaxed but confident, standing firm in the centre as he gestures towards the cavalry, holding his marshal’s baton, wearing his golden suit and swathed in that eye-catchingly huge red sash.

But in reality Byron, although extremely brave, wasn’t always a gifted commander. It was in fact a serious tactical mistake of his that contributed to the disastrous Royalist defeat at Marston Moor. After his cause failed he ended up in exile in France where he died in 1652. Knowing all this gives his portrait, done in better days, a retrospective filter of melancholy.

And I often wonder what became of the young African page who is leading out Byron’s splendid horse and gazing up at him so trustfully. 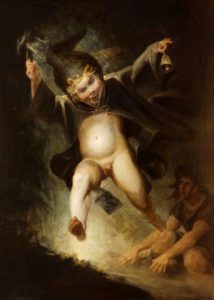 The picture I like least…Friar Puck by Henry Fuseli, which hangs in the Gallery.  I have read that Fuseli was a highly significant figure in the cultural shift away from Classicism to Romanticism and I’m sure he was; and I don’t know enough about art to make any criticism of his composition, brushwork etc.  I defer absolutely to the judgment of Sir John Fleming Leicester, the connoisseur who formed the core of the Tabley collection and who chose this painting himself.  But my gut response to this picture is I don’t like it.  And I certainly wouldn’t want to meet its hyperactive hero on a dark night. Or ever.

What Catches My Eye by Sophie Cragg 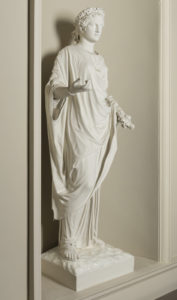 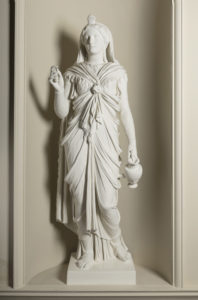 Tabley House is a fascinating place that is beautifully decorated with a grand collection of paintings and items that reveal the many interests and potential scandals of the Leicester family. What catches the eye in the Portico Room is the statue of Isis (1760), the goddess of fertility, and the statue of Flora (1760), the goddess of flowers, which suggests their interest in Greek mythology. This classic architecture is continued above the doors and fireplace where the plasterworks in the room, one titled ‘The reluctant Bride’ portray somber looking young women. It could be surmised that these show the daughters of the 2nd Lord de Tabley, reluctant to marry and leave the house, suggesting their love for their family or a potential scandal.

It is clear that there is a trend that flows throughout Sir John Leicester’s commissions of regency paintings and mass collection of library books, which is his interest in horses. Two paintings in the Drawing Room by George Garrard stand out: ‘Four Roan Coach Horses’ 1792 and ‘Two Black Coach Horses’ 1791 alongside many more such as the ‘Squeaking Jenny’ by Thomas Butler in 1755. This matches the extensive collection of books on horse medicine and anatomy which I discovered when conserving and documenting them as a volunteer. There are many more interests to be discovered in Tabley, which really connect us to the people that once lived in this astonishing house. 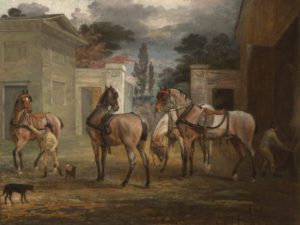